In the past month, I’ve been able to participate in several workshops relevant to my project and to BHL in general. On February 15th I attended a training session on the Expanding Access to Biodiversity Literature (EABL) project presented by Mariah Lewis of the New York Botanical Garden. The workshop was held at the Los Angeles County Arboretum and Botanic Garden, one of BHL’s newest affiliates.

Mariah gave an overview of the EABL project and of BHL’s collection development policy, digitization overview, and copyrights and permissions workflows. This was a great refresher from the BHL Bootcamp at the Smithsonian Libraries, and it was good to confirm that I have a solid grasp on how BHL works. 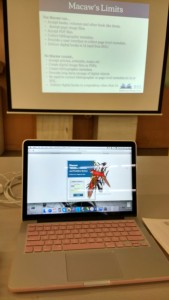 At the Bootcamp last month, we learned about the software tool Macaw, which BHL uses to upload images and metadata to the Internet Archive. At this workshop, participants were able to complete hands-on exercises in Macaw, which was especially valuable to me as one of my smaller projects at the L.A. Natural History Museum is to enhance article metadata for our licensed titles in BHL.

Mariah also went over the Admin Dash tool used for editing items directly in BHL. Using a demo account, we were able to complete a few practice exercises in making sure that the items in BHL are well curated and discoverable (since that’s the point of all of this, right?!).  I definitely left this workshop feeling less intimidated by the different software and tools that BHL uses to maintain their digital collections, and I’m looking forward to getting out of demo mode!

This past week was also an exciting one for Los Angeles as the Code4Lib Conference was held here this year! Code4Lib brings together professionals who work for library, museums, and archives and deal with technology in some capacity. I signed up for two pre-conference workshops on topics that I thought would help as I am delving into my project researching digital library best practices. I attended the Digital Projects Basic Technical Skills Bootcamp workshop presented by Kristian Allen, Digital Library Architect at UCLA Library. The workshop’s goals were to provide an overview and introduction to entry-level web tools as well as to explain some of the often-confusing (to me, anyway) vocabularies used in digital projects. Participants were able to install different package managers on our laptops, which made installing additional tools much easier. I haven’t done much command line scripting in the past, so it was good to be able to practice alongside other novices. This workshop was helpful in that it introduced me to some new open source tools but also helped me narrow down gaps in my knowledge that I need to follow up more on, like working with web servers.

The other workshop I attended was Fail4Lib, a session hosted by Dre Orphanides of North Carolina State University Libraries. Fail4Lib has been held for the past 5 years in a row at Code4Lib and provides a safe and constructive space for participants to discuss professional failures. I thought this sounded like a fantastic idea and attended to learn about others’ experiences in dealing with failures and how they coped with them. We discussed cases of large-scale failure (the polling done in the 2016 election and the Volkswagon emissions scandal) and listened to several lightening talks about participants’ direct experiences. Some interesting themes cropped up, like perceptions of failure (one talk was on a project where half of the team considered it a success but the other half considered it a failure). The value of doing post-mortems on projects (both successful and unsuccessful) was stressed, and someone even brought up the concept of doing pre-mortems, where the “what ifs” of a project are discussed before the project is underway. This workshop definitely made me feel more confident in measuring risks in a professional capacity and made me more open to sharing what doesn’t work in a project rather than just sharing the positive sides.

These workshops came at a perfect time as we prepare to move into conference month – in April, all of the BHL NDSR residents will be presenting at DPLAfest in Chicago and at the NDSR Symposium in Washington DC. We’ll be sharing our experiences from those on the blog, so be sure to check back!